November to February is generally the best time to go to Yangon as it’s cooler and dry. March to May it gets very hot and from May to September is the rainy season. 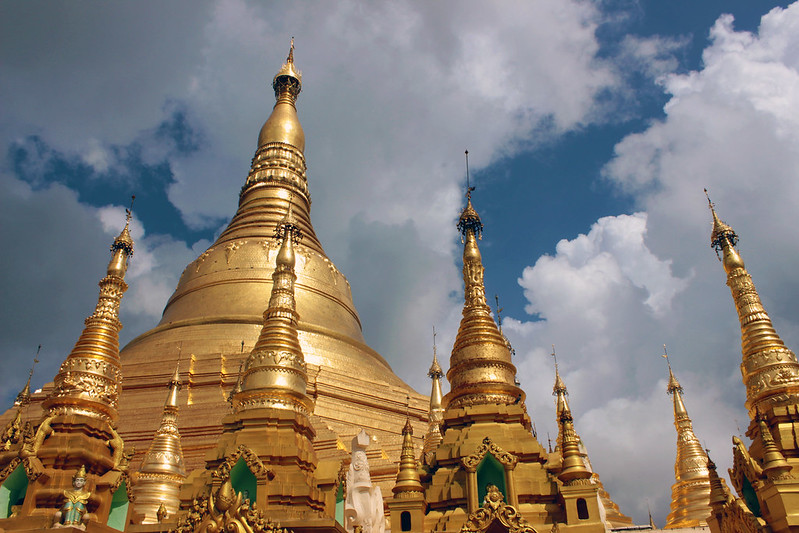 One of the driest months with virtually no rain and an average temperature of 25 degrees (up to 32 degrees) and around 60% humidity.

4th January is Independence Day, which is a public holiday.

February is the driest month, the average temperature is 27 degrees (up to 34 degrees)and the humidity is around 65%.

12th February is Union Day. This marks the anniversary of the agreement that unified Burma and as such is a public holiday. Chinese New Year also falls in February and visitors will find the largest celebrations such as lion and dragon dances happening in Yangon.

Expect and the average temperature of 29 degrees (up to 36 degrees), don’t expect rain but close to 70% humidity.
2nd March is called Ne Wins days and marks the anniversary of the coup he led to seize power. March is also when the Full Moon of Tabaung falls which is a pagoda festival, head to the Shwedagon Pagoda where you will find street vendors, food, music and traditional entertainment. The 27th is also Armed Forces Day. All of these days are public holidays.

The average daily temperature is around 30 degrees (up to 37 degrees) with a couple of rainy days. Humidity will be around 65%.

The Thingyan Water Festival takes place across the country on 13-16th April. This is Burmese New Year and is celebrated by dousing each other liberally with water. Transport is very limited over this time, don’t expect anything to be open or function properly other than the celebrations, of course.

May is generally the beginning of the rainy season and as such you can expect it to be overcast and rain on less than half of the days of the month. Humidity is over 70% and temperatures average 30 degrees. The 1st of May is Labour Day, which is a public holiday. The Full Moon of Kason which is the anniversary of the birth, enlightenment and death of Buddha also falls in May and is a public holiday too.

June is one of the three rainiest and, for this reason, overcast months, you can expect rain most days. Humidity is around 85% and temperatures average 27 degrees.

July is very wet and overcast, one of the three rainiest months, you can expect rain most days. Humidity is around 85% and temperatures average 27 degrees.

The 19th of July is Martyrs Day and is the anniversary of the assassination of Aung San and members of his cabinet. Buddhist Lent starts around this time and is celebrated by a festival of lights. Both of these days are public holidays.

August is the wettest month and will rain and be overcast most days. Humidity is around 85% and temperatures average 27 degrees.

September like May is a shoulder month between wet and dry seasons and the rain subsides somewhat yet it’s still overcast. Visitors can still expect it to rain over half the days in the month. Humidity is around 85% and temperatures average 27 degrees.

October has a relatively light rainfall, the humidity drops just below 80% and the sun shines a little more. There are less overcast days and the average temperature is around 27 degrees (up to 31 degrees).

Thadingyut is the festival of lights many buildings and pagodas will be illuminated and decorated with lights. Some pagodas light numerous candles. The festival takes place over three days, the night before, of and after the full moon. It’s a lovely time to view some of the cities buildings at night.

Very little rain falls in November, the temperature maintains an average of 27 degrees (up to 32 degrees) and the humidity drops close to 70%.

On the eve of the day before the full moon, across the country, is a robe weaving competition. It goes through to dawn when they are offered to Buddha and there is a prize giving. The demonstrations by the teams of women involved are interesting. The next day is another festival of lights where tradition sees 9,999 candles lit at pagodas. Head to the Shwedagon Pagoda for the best displays. The 27th of November is called National Day and it’s the anniversary of the student strike which is commemorated now with a public holiday.

The temperature drops to an average of 25 degrees (up to 31 degrees), very little rainfall and a humidity level of 65%.

Christmas Day is December the 25th and the birth of Christ in the Christian Calendar and is also a public holiday. There’s a week-long traditional regatta held on Kandawgyi Lake. The opening and closing ceremonies are particularly noteworthy featuring many types of decorated boats from throughout the ages, oarsmen in traditional costumes and local celebrities too.